To go carbon neutral by 2050, Europe needs more electric vehicles on the road—and many more EV chargers too. What will this build-out look like and what might it cost?

he European Union is the global frontrunner in the adoption of electric vehicles (EVs): its member countries are responsible for more than a quarter of the world’s EV production, and EVs represented roughly 20 percent of its new-car sales in 2021. The region’s combination of forward-thinking incumbent manufacturers and early-adopting EV consumers offers it a unique opportunity to create a world-leading EV ecosystem. That could generate new jobs, lessen air pollution, accelerate progress toward climate goals, and help Europe become a global EV lighthouse.

Yet a larger uptake of EVs will require a major build-out of Europe’s EV-charging infrastructure. In 2021, the continent had an estimated 375,000 charging stations. But a recent analysis by McKinsey (see sidebar, “The EV Charging Infrastructure Masterplan”), conducted for a report from the European Automobile Manufacturers’ Association (ACEA), suggests that—in even the most conservative scenario—the EU-27 will need at least 3.4 million operational public charging points by 2030.1 Extensive utility grid upgrades will be required to distribute electricity to these new charging stations and for the increased renewable-energy capacity Europe’s future EVs will need to run on cleaner power (Exhibit 1). In all, this build-out of the EV-charging infrastructure may cumulatively cost upward of €240 billion by 2030.2 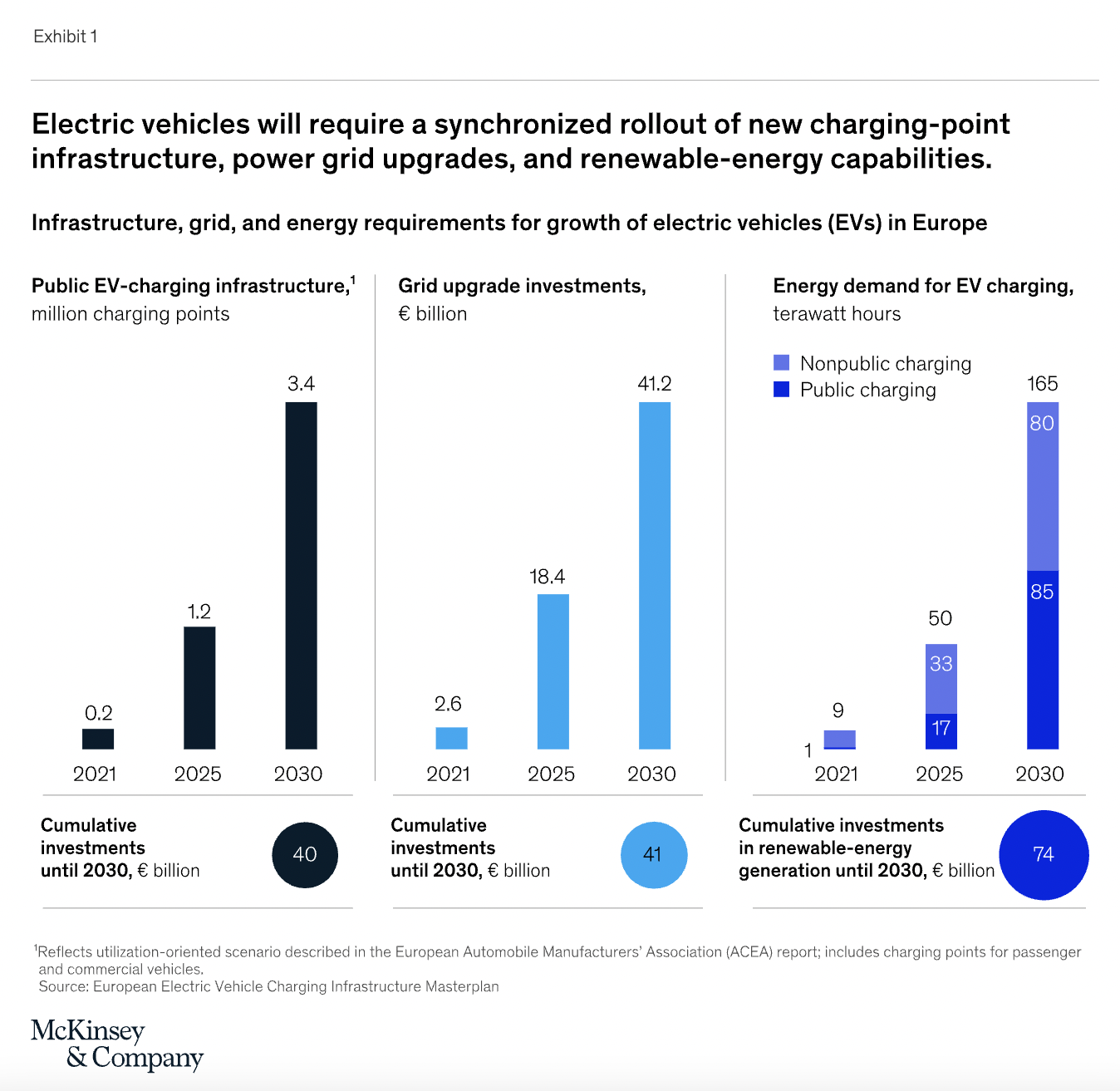 These findings hold important implications for a variety of stakeholders. Charging-equipment manufacturers will probably need to scale up production. Charge-point operators might wish to coordinate with electric utilities to address the predicted power demands. And automobile and truck makers must prepare to meet shifting consumer priorities.

The potential social inequities that could result from the infrastructure rollout are an important issue. Fortunately, the supply of infrastructure can be designed for inclusiveness through careful coordination and investment. Below are some key findings noted in the ACEA report and our analysis of what they could mean for various European EV players.

Too few charging stations are being installed

Prospective EV buyers want assurances that they’ll be able to charge their vehicles conveniently, but each additional EV driver creates more competition for access to public charging points. A 2019 McKinsey survey found that more than half of consumers’ concerns about EVs involved batteries, charging, and driving range. Without enough charging stations to allay drivers’ anxieties, the adoption of EVs could slow.

Two potential scenarios could emerge: one in which an abundance of installed charging points helps drive EV demand and another in which charging points are installed in line with current utilization growth rates. Even in the latter, less aggressive scenario, by 2030 the EU-27 would need to scale up from its current 340,000 charging stations to the estimated 3.4 million public chargers required to meet the needs of its future EV fleet. (That figure includes 2.9 million public chargers for passenger cars, 0.4 million for light commercial vehicles, and 0.1 million for trucks and buses. It does not include the estimated 29 million private charging stations that homeowners, apartment building managers, and workplace parking operators would have to install.) This more conservative scenario would require an acceleration from about 1,600 installations of public charging points a week in 2021 to more than 10,000 a week in 2030

Potential stress on the grid will probably be contained

Parts of Europe’s electricity grid will need to be reinforced before millions of new EV chargers can be connected to it. But the grid upgrades directly required by the electricity demands of new EV infrastructure would account for only 11 percent of total annual EU-27 grid investments. Most grid enhancements will be directed at distribution systems, carrying medium- and low-voltage electricity from substations to end users, not at centralized, high-voltage transmission systems.

Two potential use cases will benefit from heightened attention:

Renewables: Working in tandem with EVs to decarbonize

The widespread adoption of EVs could help Europe achieve its decarbonization targets—unless fossil fuels generate the energy used to charge EVs. To prevent EVs from triggering an increase in Europe’s carbon emissions, the report calls for adding sufficient renewable-energy capacity to meet the additional electricity demand expected from future EVs.

Equity: Ensuring that everyone can play a part in decarbonization

The push to electrify Europe’s vehicles will be profoundly more difficult if EV ownership remains out of reach for a large share of Europe’s population. But making EVs a realistic choice for everyone doesn’t mean just making the vehicles affordable. It also means providing access to affordable charging points.

Buyers who live in single-family houses with garages might have little problem installing their own chargers. For everyone else, charging will be less straightforward. EV owners who live in apartment buildings and park on the street will rely heavily on public chargers—in 2021, 42 percent of European EV owners living in cities had no access to home charging points. They might well fear that competition for access to those public chargers will be fierce. An equitable rollout of charging infrastructure calls for installing public charging points in all neighborhoods.

The broader challenge is that public charging today is 30 to 200 percent more expensive than private charging. Ensuring a fair charging price for EV owners who don’t have access to private charging points at home or at work will be extremely important in the transition to an all-electric Europe.

The infrastructure rollout that the report envisions would cost a cumulative total of €240 billion for hardware and installation by 2030. That includes installing new charging points, upgrading power grids, and increasing renewable-energy generation capacity. More than half of this funding—60 percent, or €130 billion—would support the planning, engineering, and installation of new public and private charging points (20 and 40 percent of the total, respectively). Fifteen percent would pay for grid upgrades and 25 percent for renewable-energy capabilities.

Homeowners will need to pay for the hardware and installation of their private charging points, possibly receiving government subsidies to offset costs. Public charging points will be built either by private charging operators (who will look to make money from their investments) or by local public utilities. Costs for grid upgrades will ultimately translate into electricity distribution fees for end consumers. Utilities will build and finance new renewable-energy capacity.

What all this could mean for key stakeholders

There are two potential infrastructure development pathways, which could affect stakeholders in different ways:

This is just one possible area of variance in outcomes as this large infrastructure project progresses. Stakeholders will need to consider a range of eventualities while scanning the horizon. Below, we describe the potential implications of a charging-infrastructure rollout. Our account is geared toward the perspectives of different interests.

The demand-driven pathway, with its larger number of chargers, assumes lower utilization rates for each individual charger. This would almost certainly reduce the profitability of charging-point operators (CPOs). The utilization-oriented pathway, by contrast, ensures that most charging points will be profitable. CPOs are likely to prefer the utilization-oriented pathway to avoid “stranded” (unprofitable) charging stations.

In many cases, grid operators have no visibility into charging behavior, so it is difficult to anticipate and manage electricity demand. Smart charging, involving communication between EVs and electricity distribution systems, could enable active load management by shifting electricity flows from EV charging to times of day when general demand is lower. This might mitigate the need for investments in grid infrastructure by reducing strain, as well as electricity costs for consumers.

Smart charging’s potential is especially high in places where vehicles are parked and connected to chargers for prolonged periods—for instance, charging at home, at a workplace, or at a fleet depot for commercial vehicles. A first development phase, which could be widely under way by 2030, would involve unidirectional smart charging: the charging times of EVs would be centrally controlled to reduce peak loads. In a second stage, bidirectional smart charging would use vehicle batteries as intermittent storage within the grid: batteries could be charged or discharged depending on levels of energy generation and demand.

Bidirectional charging is a particularly promising way to store energy on the grid, since the European Union’s passenger EVs would have up to three terawatt-hours of available battery capacity—equivalent to 40 percent of the European Union’s daily average energy demand. The technology would be a timely solution because the need for grid storage is expected to rise during the transition to renewable energy. To be implemented, bidirectional charging would require grid operators to partner with EV owners, and that would create new business models to compensate them for depleting their batteries.

The more chargers that are created, the more immediate the benefit for auto manufacturers. A potential EV buyer will be more likely to go electric if public chargers are available in convenient locations. The build-out could be accelerated by collaborations among manufacturers, such as the IONITY charging network (a joint venture by BMW, Daimler, Ford, Hyundai, and Volkswagen).

Alternatively, if auto manufacturers and automotive suppliers can create a vehicle capable of charging more quickly than it can today, they could reduce the number of public chargers needed. Faster vehicle charging speeds will both reduce range anxiety in drivers and allow a more efficient charging point build-out (since fewer chargers are required to charge the same amount of vehicles).

If auto manufacturers and automotive suppliers can create vehicles capable of charging more quickly than today’s can, they could reduce the number of public chargers needed.

The city of Stockholm is a pacesetter for infrastructure deployment: the average end-to-end installation time for a direct-current (DC) fast charger (150 kilowatts or higher) is seven months. Similar installations in other locations can take up to 20 months. Stockholm’s preparation-heavy approach requires an up-front investment of time because cities and municipalities must conduct high-level feasibility screenings in collaboration with operators of electricity distribution networks. Once a promising charging location is identified, approval processes move quickly—which in turn accelerates the planning undertaken by charging-point operators.

Other locales have discovered different (and potentially complementary) approaches. The city of Oslo has devised a checklist to speed up project approvals. The Netherlands created a knowledge platform to address concerns quickly. France’s “right to a socket” policy eliminates the back-and-forth required for home installation approvals.

Governments now direct their EV-funding budgets largely to incentives for purchasing EVs. It could be beneficial to examine how much is spent to subsidize EV infrastructure and renewable-energy generation. A balance will need to be found between encouraging private-sector funding for charging infrastructure while also using public support to ensure an equitable build-out, so that affordable charging is available even in less profitable locations.

Europe, which is undergoing a once-in-a-century mobility revolution, can embrace this opportunity. Success will require the building out of the EV-charging infrastructure, clearly communicated strategies, and strong cooperation among a wide variety of public and private stakeholders.